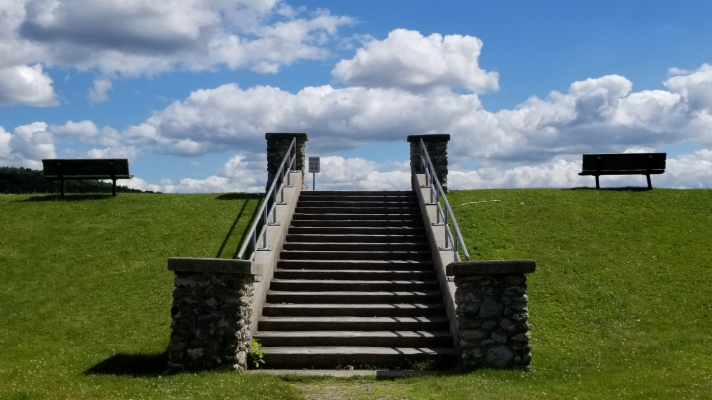 Today’s post is one I wrote back in 2013. It is a timeless topic; we are always called to try new things and not to give up before we start.

I can.  Two simple words that flashed a few times on the TV screen at the first small church group meeting of the semester.  The video we watched was an introductory video for Run for God, and the focus was on the Hoyts, a father/son team who are well known in the racing field.

According to their website, Rick, the son, was diagnosed as a spastic quadriplegic with cerebral palsy as a result of oxygen deprivation to his brain at the time of his birth.  Their story is an amazing one.  The father, Dick, began running when Rick told him of a race for the physically disabled.  Now Dick runs marathons, triathlons, and even the Iron Man while pushing or pulling Rick right along with him.  Through their amazing efforts, they are a prime example of “I can.”

I can’t.  Two words that don’t go well together when we’re called to do something.

Each year for ten years since the age of 13, I attended a weekend-long retreat with my church’s teen choir – later it became a full youth weekend.  Somehow I had always remembered the date, October 10th, but I could not for the life of me remember the year until I came across the packet for this one particular retreat, my first as an adult staff member.  It was 1997, and on that October day over Columbus Day weekend, we held a funeral for “I Can’t.”  Seriously!  Someone made a tombstone out of cardboard or whatever and wrote:

This funeral went along with a session talking about how we should never say, “I can’t,” but rather, “I’ll try.”  What a difference that one-word change makes.  It takes us from completely giving up on ourselves before even trying, to giving it a try.  “I’ll try” doesn’t mean we’ll succeed, but it calls us to action, and for that, we can be proud that we did try no matter what, and because we tried we glorify God.  How awesome does that sound?

Dick Hoyt never thought that he would be running races, competing time and time again, but when he God called him, he took the challenge, and he and his son Rick have become an inspiration to the world.  They emulate the “I can” spirit.

Today, hold your own funeral for “I Can’t.”  Say goodbye to it forever, and from now on start using the words, “I’ll try.”  No matter what challenges you may face.  It may be a physical challenge such as getting up and exercising, training for that race that you never even dreamed you would run, hiking that mountain you’ve loved looking at but never thought you would climb.  It could be something related to a job, whether paid or volunteer.  It could even be something as “simple” as talking to a person you’ve seen around but lacked the courage to approach.

Whatever call you may be receiving, try putting “I’ll try” as your response instead of “I can’t,” and see where you go.

“I can do everything through Him who gives me strength.”

Dear Heavenly Father, I just want to thank You for giving us all the phrase, “I can,” and showing us that, if we fix our eyes on You, if we trust in You, You will give us the strength to carry it out.  Help us to say, “I can’t,” no longer. May our “I’ll try” turn into “I can,” and then become, “I did.”