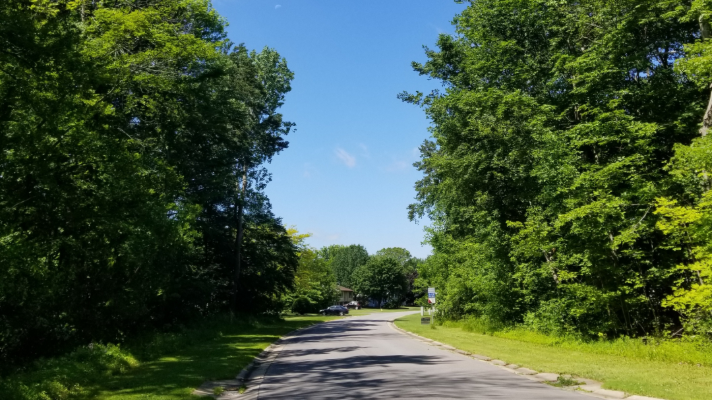 An excerpt from a story I’m working on. It’s Jeremy’s first time in the little town of Hamish.

“You’re new around here,” the cashier said when Jeremy approached the counter.

“Yes, I guess you could say that,” Jeremy answered back. “Could you tell me where I am?”

The cashier looked at Jeremy curiously.  “You don’t know where you are? How did you get here then?”

“I know, or at least I’m certain that I’m in a town called Hamish, and that it’s somewhere in the Finger Lakes. I’m just not sure how I got here or how to get home.”

“Well, you’re definitely in Hamish, but I’m finding it hard to believe that you found this place ‘accidentally.’ It’s not really a place that you just happen to find, at least not anymore. It was settled that way, back in the late eighteen hundreds by Commander David J. Hamish, just after he came back from fighting in the Civil War. He wanted somewhere to live out his life in peace, and he happened to find this place one day while exploring the woods. The Commander had lived in the forest for months, trying to find that one special place he could call his own, and when he discovered this piece of land, he settled it. It wasn’t difficult for him to purchase it, actually, and he finished his life off here. Hamish had a wife and two children whom he had sent for once the place was secured, and after his death, instead of moving away, they brought people to it. They helped make the town what it is today,” The man said proudly.

“Oh, well, thanks for the history lesson. That was very interesting,” Jeremy said, his head reeling from the information the cashier just threw at him. Deciding to move the conversation in the right direction, he pushed aside this newfound information and continued. “It’s actually a long story about how I got here, and to be perfectly honest, I don’t know if I could explain what happened, but it definitely was by some accident that I ended up here, and now, if you could help me figure out how to get home, I would appreciate it. I really need to get home by tonight.”

“Well, there are only two ways out of here: the way you came, and the other way.”

Jeremy tried hard not to roll his eyes. “And what is the other way?”

Okay, breathe Jeremy. In and out. He’s not trying your patience on purpose. “So, what you’re saying is there’s a way out of town in the north and one in the south.”

“Precisely. You just need to know which one you should take. Where are you ?”

“Rochester, huh? Hattie was just up that way recently. You should talk to her. She’d know how to get you where you’re going.”

Jeremy sighed; he couldn’t help it. “And where can I find Hattie?”

“Oh, she’ll be at home. She’s always there. Poor girl is dying. Hey, it might do her some good to talk to someone new.”

Jeremy waited for more. Another customer, a teenaged boy in ripped jeans and a t-shirt with the logo of some band Jeremy didn’t recognize, to the counter, wanting to pay for gas and a pop. “Pop.” Jeremy cringed. He would never get used to that word. Where he grew up, it was always “soda.” He stepped aside for the transaction, and when it looked as though the cashier had forgotten him, he made his way back outside.

“Well, that got me nowhere.” As soon as he had finished his sentence, his stomach began to growl. Must be time for lunch, he thought and decided to head back to the diner he had seen on his way into town. “Maybe someone there will be able to help me.”