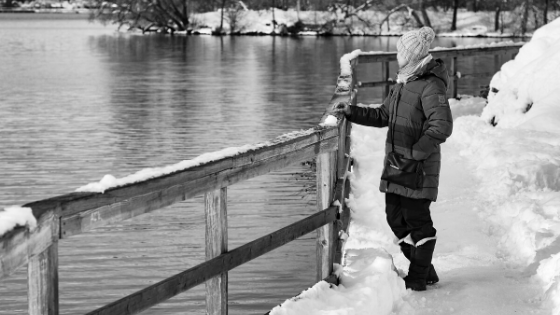 This is the season when we all start taking a look at what we’re thankful for. But have you ever been in a different type of season, one where it’s difficult to see or to even take the time to look?

On Sunday morning, I stood on the stage with the rest of my worship team. We had already led all four songs, and it was time for someone — usually one of the pastors — to come up and speak before we sang a few lines of our last song one more time. This time, the director of youth ministries in our church jumped up on stage with the microphone and began to speak. He brought up the ten-year challenge that has been going around social media recently and spoke about how much he has been thankful for in those ten years.

As I stood there, my mind drifted back ten years and I began to wonder, did I feel thankful at that time? I honestly do not have an answer to that question. I don’t think I actively thought about it. Ten years ago was considered the worst year in my family’s life. “The year of hell,” we called it (forgive my wording). We had already buried my father earlier in the year, and my five-year-old son was battling cancer.

Thanksgiving time that year I sat beside my grandfather’s hospital bed, holding his hand until he breathed his last. We buried him not long before Thanksgiving and decided we would stay within the area — my extended family lives four hours away from us — to celebrate the holiday. But we received a call from the hospital where we were told that my son’s counts were zeroed out, which meant that my husband and I, along with our three children, would have to drive home as soon as the funeral was over. Our plans for a big family Turkey Day reunion went up in smoke.

What was there to be thankful for that season?

We worried. Worried that my son would have a high fever and wind up in the emergency room. We mourned the loss of my grandfather while still mourning my father. For a time before his death, I was actually in a place where I was angry with my grandfather. I was angry that he was still alive but my father was not. He got to live his life to the fullest, to watch as eighteen grandchildren were born as well as many great- and great-great-grandchildren. My dad didn’t even have the chance to meet all of his grandchildren let alone any great-grandchildren.

Fast-forward nine years. Another Thanksgiving that leaves me questioning, “Was there anything I was thankful for?” That Thanksgiving, just last year, was the first one without my nephew. Earlier that year he had taken his own life. He was eighteen. We made our way down from New York to Virginia — where my sister and her family live — and celebrated a day where we’re all supposed to be thankful. We had wanted to make this trek the year before and celebrate with my entire family — all my siblings, my mom, and my nieces and nephews — but it didn’t work out. This time we celebrated Thanksgiving day knowing that we had missed our chance to ever celebrate with everyone.

This Thanksgiving. My sister from Virginia, the one who had lost her son last year, called while we were enjoying games with my mom and another sister. When I heard her voice as she spoke with my mom who sat beside me, I began to wonder what my sister was feeling. How was her Thanksgiving? This year, she was without another son. Not gone from this world, but unable to share the holiday with them due to some bad choices.

All over the Internet, you can find people encouraging you to “always look for something to be thankful for.” That’s not bad. In fact, it’s great advice. But where that advice fails is for those who are so thick in the middle of a battle that they don’t even have a chance to think about that. To even think about thinking about it.

But it’s never too late to look back. When we are officially out of that battle, we can look back and begin to find those things for which we can be thankful for, things that may not have shown themselves in that time for one reason or another. Though this gratitude may be delayed, we can still have it, still find it. And when we look back at those times and find that which we can be thankful for, it tends to lessen the pain if even just a little.

There are many things for which I can find to be thankful for when I look back. Just because I have no idea if I was thankful in the moment doesn’t mean I can’t be thankful now. Not for the battle I was going through (though sometimes those are something we can be thankful for), but for what came out of it. Family togetherness, love, a sharing of emotions and a hope for a better future. If I keep digging, keep picking away, grabbing one piece of gratitude after another as if a treasure buried in the sand, I’m sure I’d be able to resurface with an entire bucket full.

Remember to find gratitude, even if you think it’s too late.