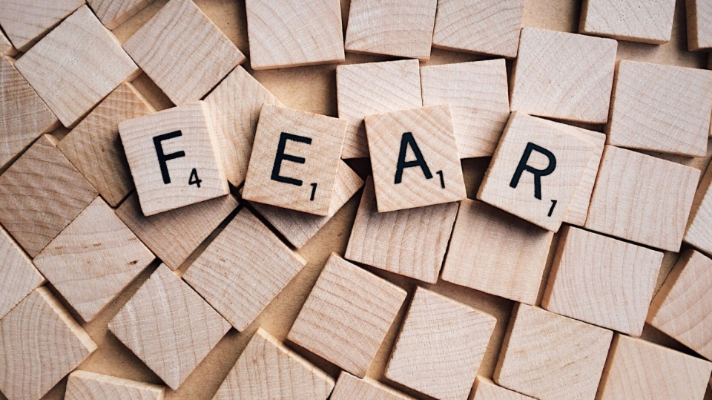 Fear. It’s all around us. It’s inside of us. Great or small, we all, at some point, have something we are afraid of.

I’m afraid of failure, of being wrong or making a mistake.

I have phone anxiety, probably because of the above. If it were up to me, my husband would make and receive all of the calls except from my closest friends and family.

When my son had cancer, I was afraid that he would die. When my husband goes away on trips for work, I fear for his safety. I fear for my children’s safety each day, spirit, mind and body.

Sometimes fear has a hold on me so tight, I can’t do whatever task I’m supposed to, and that can lead to some frustrating situations.

Some of these fears are rational, some irrational. But they are there.

The question, then, is what to do with it?

In Francesca Battistelli’s song, she breaks up with Fear and says it’s no longer welcome. Zach Williams tells us fear is a liar, and The Afters say they will fear no more.

There are books out there that are ready to help us overcome our fear. Running Scared by Edward T. Welch, Fearless by Max Lucado, Do it Scared by Ruth Soukup.

The point is, whatever fear we may face, we need to push through it; we need to get to the other side. We just need to know how.

In Persia, there was a rule in King Xerxe’s palace: no one was to come before the king without first being invited.

But when Esther was given the news that her people were going to be killed, what choice did she have? Well, to be honest, at first she basically said, “Are you kidding? Don’t you know what will happen to me if I go before the king without being called? Nope. Can’t do it. Sorry.”

At the insistence of Mordecai, Esther had to push through her fear. And this was no irrational fear; this was a real matter of life and death. This man, this king, had banished his wife for not appearing before him in her crown, an act that would have ended up humiliating her and possibly going against modesty and decorum if in the king summoned her to appear in only her crown.

If he had no problem sending Vashti away so easily, what would stop him from having Esther killed?

But Esther gathered up as much courage as she could to do the task she knew needed to be done. How did she do this? With other people. Esther sent a message to Mordecai to have the Jewish people pray and fast for three days. She and her servants would do the same. On the third day, Esther would go to the king.

Esther gathered her strength from others. She knew she couldn’t do this alone. Knowing that others were fasting and praying to God, beseeching Him in this great time of need, asking for his help and favor, gave her the strength and courage she needed.

And on the third day she appeared before the king who extended his golden scepter to her, an act that spared her life.

Step one done. She took made the first move, and it had worked. But her fear was not gone. Though Xerxes had told her to ask for anything up to half of his kingdom, she asked for him and Haman to come to a banquet with her.

At the banquet, Xerxes asks Esther again, “What can I give you up to half of my kingdom?” Her response is another banquet the following night.

Maybe she was making sure everything was just right for the grand reveal, “Haman is a bad guy who wants to kill me and my family,” but she was still gathering up her courage to share this information with the king. Esther had no idea how well this news would go over. Haman was his trusted adviser, his grand vizier. Perhaps even his queen would not be able to pursued him otherwise.

There was also the possibility that Xerxes could have become angry at Esther, blaming her for trying to undermine his decision to raise Haman to this position.

Anything was possible, and Esther was going to have to find out if she wanted to try to save the lives of her people.

At the second banquet, Esther gathered up her courage and spoke against Haman.

If you’ve read the book, you know the ending. Xerxes ordered his men to impale Haman on the very pole that Haman erected in his yard to use on Mordecai. A bit of poetic justice.

By facing her fear, Esther changed the fate of her people and herself.

What can we learn from Esther? How was she able to accomplish something that we may be struggling with?

For one, Esther asked for help. There was no way she was going to do this on her own.

Have you ever been a part of a prayer chain? Have you just reached out and said, “Please pray for me?”

Last year I had severe migraines. So severe, I wound up in the emergency room. After visiting with a neurologist, I was told I needed an MRI. Now, I have a fear of tight spaces, and this was going to be rough on my psyche.

But I tried. Twice. The first time I tried to go through with it I failed. I lost it before I even went into the tube. At the front desk I rescheduled, and then ended up rescheduling again later on, this time in favor of an open MRI.

Finally, the day came, and I was a sack of nerves. Though one of my best friends was with me for both MRIs, offering her support, I needed more. I reached out and asked for prayers from anyone willing to pray.

God gave me understanding and supportive people in that room. A woman I had never met before became a calming voice, and a gentle hand. While I was inside the machine, a worship song played in my head, over and over, and a peace came over me; I could feel the prayers being lifted for me.

I faced my fear and came out unscathed on the other side. In fact, I came out better than I went in, because of my experience. And I found out that there was nothing wrong with my brain (another fear).

Esther fasted and prayed. When the disciples were failing to drive out the evil spirits in the New Testament, Jesus told them that those spirits only come out with prayer and fasting.

Sometimes, we need to really go to the heart of the issue, and to do this we need to do our own prayer and fasting. When we deprive ourselves of food, electronics, whatever distracts us from truly talking with God, we have the ability to press in and seek God’s counsel more than we would have otherwise.

It helps us receive His word, His peace, whatever it is He wants to give us.

God will come through for us each time and help us face whatever is holding us back and rebuke it.

And finally, Esther did what she had to do. She took the step and faced her fear regardless of the outcome. Esther did what she knew she needed to do in order to honor God and help her people. God was with her every step of the way, guiding her, feeding her courage.

There is a way to overcome all of our fears, and that is to follow Esther’s example. Seek others, seek God, pray and fast, and take that step. Any combination of these, or even all, will bring us toward overcoming.

You might not seek to end all of your fears. I’m quite content staying far away from sna…you know. But there are those things that I need to face if I want to live the way God wants.

And sometimes, this “facing our fear” will be something we need to do each time the same situation arrives. Just remember: You did it once, you can do it again.

Lord, heavenly Father, You have the ability to help me overcome. You alone have the strength and courage I seek. Help me, Lord, to come to You in my need; help me to listen to You, and to seek others to pray along with me. Be my Rock, Lord, my strength and my portion forever. In You most holy name, I pray, Amen.