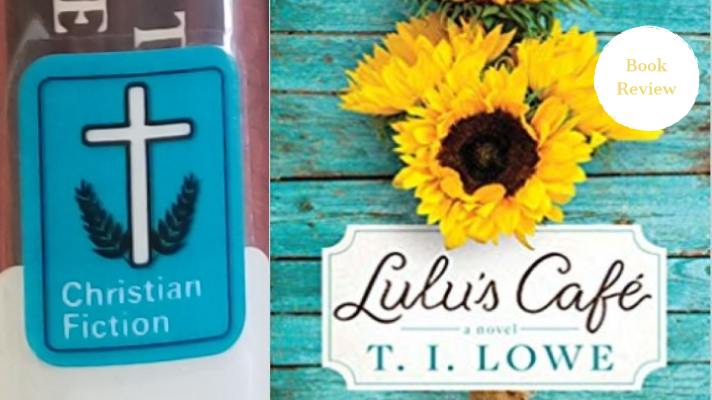 Lulu’s Cafe by T.I. Lowe was an intoxicating piece that brought an abundance of emotions to the surface. At times I wept for the main character, Leah Allen, as she endured being tortured by her husband during his drunken fits of rage. As Leah put it, she was living with the devil himself. There were times when I was on edge, wondering if she would successfully make her escape to the east coast from Olympia, Washington as she had desired, putting as much distance between her and the last gruesome day spent with her husband.

I was awed by the people God had put into Leah’s life on this new journey, even if for a brief moment. At times I broke out laughing along with the jokes and friendly banter of the new friends Leah finds along the way to healing. There were even times when I erupted in laughter while at the same time cried.

This story, the story that starts in Leah’s own personal hell, ends in the most beautiful place she could find herself, a place close enough to heaven for all she endured in her life.

Leah Allen was an orphan who spent her entire childhood living in foster care or group homes. For a while, she even found herself homeless until she found a job and then a man who promised to take care of her. For ten years, she fought to survive an abusive marriage. The scars left on her body were constant reminders, and she doubted that she would ever be safe, even when she left his lifeless body in their bedroom and ran as fast and as far as she could, always looking over her shoulder.

In a story as hurtful as this, how could Leah even think about loving someone again? However, when she landed in a small town in South Carolina, that’s exactly what happened. It wasn’t love at first sight; it didn’t even happen quickly. In fact, at first, neither character trusted the other. Crowley Mason saw Leah in Lulu’s Cafe and noticed the haunted look in her eyes. Who was this woman, where did she come from, and why was she spending so much time inside this cafe run by a sweet old woman who he considered a second mother? Was she looking to bring harm to Lulu?

Leah could easily tell that Crowley did not like her, did not trust her. This gave her even more reason to move on to the coast as she had originally planned, but the sweet woman who owned the cafe kept feeding her, told her to stay put, and asked for her help prepping for lunch right at her table while they talked.

But as time goes on, friendships are formed. Walls begin to crumble, and light begins to shine through. Leah learns to start enjoying herself though continuously looking over her shoulder, waiting for the authorities to find her and take her away for what she had done.

Lulu knew. Lulu could sense what was going on, though she knew nothing of the true horror Leah fled from, the scars that ran so deep inside of her. Lulu offered Leah friendship and a place to live and work, at least for the time being.

What happens at the end of the story is truly a work of God, but I’ll let you read it for yourself. I hope you do. It was a beautiful story of releasing the old and embracing the new, letting God work through others to find the right path.

Find more books by T.I Lowe at her website

This is obviously not a Christian Fiction book, but it is the book I’m reading right now. Christian themes can be found in any book, and this one that I’m reading now by one of my favorite secular authors, Lisa See, is at the moment dealing with grief and forgiveness. I don’t know how it will end, but we all need to forgive, we’re called to forgive, no matter what happens.