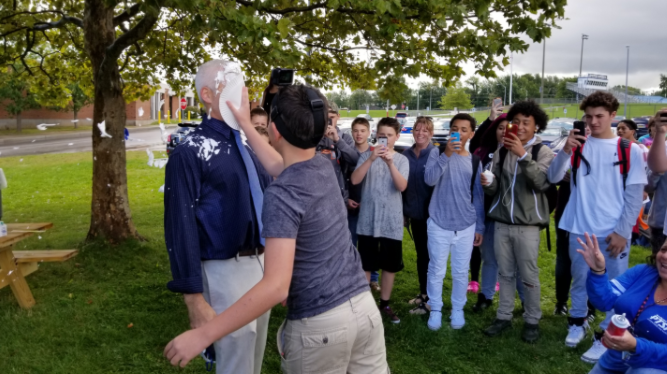 When we are thrown into a scene which we would never have placed ourselves, how do we react? Do we fight, kicking and screaming at the injustice we feel? Do we gracefully bow out and runaway? Or do we stay and try to make the best of the situation, trusting that God has a hand in this?

This is week 2 two of Esther for Today

How do you deal with change? Are you the “Bring in on!” type or “Stay far away?” Or are you somewhere in the middle?

For me, I’ve pretty much stayed at the “Stay far away” stage growing up, but I’m learning to accept change as I go. Change is not easy for me, regardless of what it is, but over time, I’ve been accepting what God has placed before me, even if I don’t jump headlong into it. It’s more like dipping my toes to test the water and then slowly submerging.

When I have the ability to make this slow change, then great.

But what about those times when change is thrust upon us and we don’t have much time to “get used to it?”

And what if it was something we truly did not want?

When Esther was taken from her home in a caravan to the king’s palace, she was thrown into a change that she did not want to make. If she could have, I’m sure she would have fought it tooth and nail. But she couldn’t. Instead, she arrived with a multitude of other girls from all over the kingdom, each one giving up the life they knew, perhaps with their own plans and dreams for the future.

Suddenly, all of those dreams were taken away.

Esther was told to hide her true identity as a Jew. No longer could she partake in the celebrations and sacrifices that were practiced by her people. I’m sure she had to be careful about praying since prayers said aloud could find their way to the wrong ears.

Beyond this, Esther was separated from the rest of the women, set aside as a favorite because of her beauty. She endured a strict beauty regimen, preparing her for her time before the king. Walking around freely as she had done in her old life was not permitted in the palace. Her only form of companionship were her attendants.

Her old life had slipped away; Esther needed to embrace this new life that she had been chosen for, that God had chosen her for.

Did Esther have a choice in this? She could have run away, but doing so would more than likely end in her death. She could take her own life to be rid of this new life. Others, I’m sure, had chosen this way out, but it wasn’t a choice for Esther.

Instead, Esther embraced the new life, as difficult and unpleasant as it may have been. She made the choice to trust in God. Esther put her life in His hands, gave Him full control.

We may not experience the kind of ripped-from-our-home-enter-a-new-life that Esther had(and I know there are those out there who have), but at times we may feel like our situation is close enough to it. We feel that the change happening around us or to us is not good and that it came too fast for us to process.

This could be a job loss, a death, a new leader, a change of rules.

Regardless of what it is, we have a choice: we can run, fight, or we can embrace the change.

Sometimes, God does tell us to leave. Perhaps this change is His way of saying, “You’re done here. I have something else for you now.”

At times, He may have us stay and fight. Whatever is happening may not be good, and we’ve been chosen to make it right again.

And then there are those times when we need to just embrace this change. God allowed it to happen for our good, or for a good that only He knows about.

Whichever way we chose to go, the ultimate choice we need to make is to trust in God. Trust that He has a plan for us and that He will guide us through.

Esther had no idea why she was chosen, why she had to give up her old life until she had to go before the king to ask for the lives of her people to be spared. If she wasn’t in the palace, favored among the women, and chosen specifically by the king as his new wife, ’ plans would have been carried out. A nation could have been completely wiped out.

“And who knows but that you have come to your royal position for such a time as this?”

But she chose to trust God despite her own feelings.

It’s not easy to do this, to trust God completely, but it’s necessary. We find this time and time again not only in the Bible but in the world we live in today.

Trust God. Trust that He has a plan, and whatever change you’re facing at this moment, try to see God in it. Ask Him what He’s doing, what He’s walking you through. He may not answer you right away, but in time, you will see what He saw. You will know and understand.

Be blessed by what God has for you. Put aside your pride, your fear, your comfort, and embrace what He is doing in your life.

Lord, Heavenly Father, I thank You for your wisdom, for knowing what’s best and acting on it. Lord, thank You for walking me through whatever plans you have for my life. Help me to look to You always, but especially when I’m in the midst of a change. Help me to see through Your eyes, Lord and not my worldly ones. Take the pride and fear that blind me from seeing Your purpose. I praise You for You are good. Thank You, Lord Jesus, for guiding me. In Your Name, I pray, Amen.