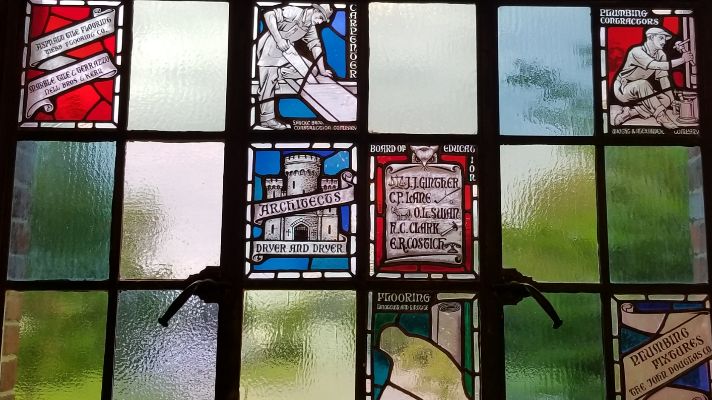 Last week, while attending my son’s middle school jazz concert, I found myself out in the foyer due to back problems. Thankfully, my son’s choir was the first in the program which allowed me to watch him sing before I had to head to the back. Once I exited the auditorium I made my way over to the window. This allowed me to be close enough to the music but still out of the way.

The window I stood by had stained glass panels, each depicting a different company. They were there as a “Thank you” for their help in building the school back in 1934, a school originally built to be a rural high school before the new high school was built and the middle school took over its halls. This school is the one in our district commonly referred to as “the castle” due to its appearance.

As I admired the panels with the light streaming through, I began to think about what else these panels meant. Forever ensconced in the north wall near the auditorium, they brought more than a “thank you.” What they brought with them was a reminder that someone came before us, before many of us were even born, to create a place of learning. All of these men worked hard to create a space where kids would learn reading writing, and arithmetic, for generations to come.

These men knew what they were doing, what they were building, but I began to think about those that came after them. Each of these companies, the architects, bricklayers, plumbers, electricians, have passed down their knowledge to the next generation. Though these particular companies may no longer exist, their crafts continued on. How many people were taught how to design a building, lay brick, place flooring, install lighting or plumbing fixtures? Teaching and learning went beyond .

We learn from those who came before us whether we have met them in person or have read about them or their discoveries, their lives, in black and white.

I’m thankful for the stories in the Bible. As I read I’m struck with truths from those who walked this land long before even my grandparents or great grandparents were a thought. Reading about their lives helps me to learn how to (or how not to) live my life. Stories from Abraham, Isaac, Moses, Ruth, Esther, Paul, Stephen, and most especially from Jesus, weave their way through the Good Book and stick with me. I look to those from ancient times to be my guides.

I have learned patience, faithfulness, love, selflessness, and so much more. Though I have not mastered any of these and slip up a lot, I have a foundation and an example to learn from.

And it’s not just family members who can teach. Like those who helped build my son’s school, we can learn from others in the profession of our choice. As a writer, I have many to learn from even if I’ll never have the opportunity to meet them. At the moment I am reading Stephen King’s On Writing. I also have a list of books like it to read once this one is done. I am a member of a writing community that caters to the published author as well as the person just learning to say, “I’m a writer.” We learn from each other, finding the skills that we lack in those who can teach it.

This is true in anything that you want to do. Find those who have been there and learn. Seek to learn all that you can to be the best that you can.

God equips all of us with the skills we need to follow the path He has made specific to us. We are given gifts that are not meant to be hidden away but shared. One of the hardest things to do is to be confident in our gifting, but we need to be. It’s not pride, it’s knowing that what we have, what we can do, is from God.

Maybe no one will remember our names, but does it really matter? What matters is the message, the skills, the love that we teach to even just one person. What matters, is how we live our lives while on this earth.

Lord, I thank you for the gifts that you have given to each and every one of us. Help us to learn from those who have gone before, Lord, and help us to teach those who come after us.