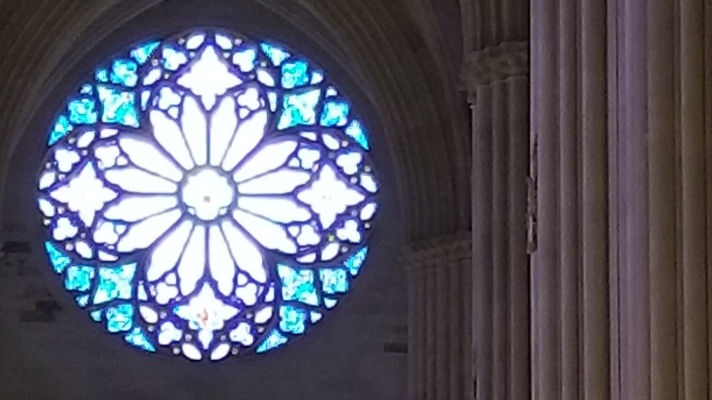 Rachel held her son tightly in her arms and ran her fingers through his sandy blond hair. How could God give her such a precious gift, she wondered, only to threaten to take him away so young? Why does God have to be so cruel?

Rachel had been fixing lunch for her son, Skyler, and her husband, Sean, when Sky came into the kitchen.

When Rachel saw how pale he looked, she took his temperature and immediately called the hospital.

Skyler Robert Sutton was just three-years old when he was diagnosed with Acute Lymphoblastic Leukemia. If anyone had asked her before today what the worst day of her life was, she wouldn’t hesitate to tell them that it was the day Sky was diagnosed.

But now, as she held her son just months after his diagnosis, that day paled in comparison.

Everything seemed to be going well. Sky’s Oncologist, Dr. Foley, said they had caught it early and started treatment as quickly as was possible. They did everything they had been told including quarantining the house, keeping everyone not in the immediate family away, when Sky’s immune system was severely weakened.

Why, then, was Dr. Foley’s speech so grave at that moment? Rachel couldn’t understand what happened. What did he mean Skyler had an infection? They were so careful. They can fix it, right? Rachel’s head swelled with questions as Dr. Foley continued to explain to her and Sean what exactly was happening and what their options were.

Rachel found herself removed from the conversation, unable to focus on the words Sky’s doctor was uttering. She knew an infection could be taken care of, but she also knew that there was a high risk of death if his body didn’t work with the antibodies to fight it.

Oh, Lord, don’t take my baby from me.

Michael ran through the open double doors leading into the Emergency Department at the hospital. His heart was pounding, his body shaking. All he could think of was getting to Sarah.

Today started out just like any other Friday. Michael woke up, got ready for the day, kissed his wife and daughter goodbye, and then headed off to work.

It was around lunch-time when the call came in. His wife, Amy, was frantic on the other line. Their twelve-year-old daughter, Sarah Grace, had taken advantage of the warm weather that blessed the last day of spring break. As soon as she had finished her lunch, she hopped on her bike and started to ride around the neighborhood.

Who would have imagined someone would be drinking at this time of day? Worse yet, he thought it would be perfectly fine to get behind the wheel of his car.

“Sarah Andrews,” Michael panted out to the first hospital employee he could find.

The woman behind the desk looked down at her computer to search for Sarah’s name. When she looked up at Michael again she couldn’t hide the sadness in her eyes. “I’ll take you back,” she quietly offered.

The walk down the hallway was eerily quiet. Although he was able to see the action typical of an emergency department, he was unable to hear it. It all seemed so surreal. Thoughts swirled around his head, thoughts about his little girl.

Sarah’s birthday was tomorrow; she’d be thirteen. He couldn’t believe she was almost a teenager. Michael pushed down the thoughts that tried to surface at that time, thoughts he didn’t even want to consider.

When they finally reached their destination, Michael found his wife sitting motionless in a chair staring at the wall across from her. The ashen look on Amy’s face brought him to his knees. He placed his head in her lap and wept.

Crystal sat in the small room she and her twenty-three-year-old daughter, Melody had been escorted to just moments before. Melody wrapped her arms around her mother, trying to be strong for her.

“She’ll be okay, mom. The doctors will take care of her.”

The words her daughter meant to be reassuring fell flat. All Crystal could think about was the note, the one she held onto so tightly in her hands. The one that could change her life forever.

Melody was the one who found the note. Her twin sister, Makayla had left it on top of her dresser to be seen at a later time. For once Melody’s lack of respect for her sister’s personal space had paid off. All Melody wanted to do was borrow Makayla’s rose scented perfume. What she found was not so sweet.

Being nosy, she had opened up the note and read it. Then she screamed. “Mom!” She ran out of the bedroom in search of her mother who was downstairs in the kitchen fixing her lunch. “Mom,” she called to her, breathless, “where’s Makayla?”

Crystal shuddered at the memory. When she had read the note Melody had handed her, she was frantic. They searched the entire house for Makayla. Where did she go?

She had prayed. Dear God, help me find my little girl. Let her be okay.

When they finally found her, she was on the floor of the bathroom in the basement. Black tears streaked her face where her mascara had run. Next to her almost listless body lay an empty bottle of pills.

Mom, sis, I love you.
I’m so sorry, but I can’t be a part of this world anymore. Please forgive me. Mak

Mary stood at the top of the hill. Her nerves wouldn’t allow her to sit; she had to be upright, had to keep moving. She had already lost her husband, and now it was inevitable that she was going to lose her son.

This sweet baby boy God had blessed her with thirty-three years ago was going to leave her. He may have been an adult, may have taken charge and even surpassed her in his choice to serve God, but to her, he was still her little boy.

Tears streamed down her face as she remembered how helpless she had been when he received the death penalty. She wanted to fight it, wanted to scream out, but she couldn’t. Who would listen to her, anyway?

He was always a good boy. He did what was right. The accusations that were hurled against him could have been true. No, they weren’t true. She knew it. His friends knew it. What crime did he commit?

He began to preach when he was thirty, and the message he always made clear wherever he went was to love. But these people didn’t love him. Mary watched the crowd that grew around her. They were yelling at him, insulting him. Did they even know him?

She watched as her son e, watched as they nailed him to a tree. Why a tree? This sentence was humiliating. It was a death for a guilty man, a death for a man who brought shame to the community.

Is that how they saw him? Is that what they thought of him?

Oh, God, why have your forsaken him?

Mary looked up at her son, stared deeply into his eyes. She could see his pain.

When Dr. Foley left the room, Rachel held Skyler even tighter and wept. Sean tried to convince her to take a walk, to get some fresh air. He thought it would do her some good. But she couldn’t leave her son. Not now. She needed to be there for him, needed him to know she would never leave him.

Michael needed to take a walk. He couldn’t stay still, couldn’t just wait for news of his daughter’s condition. Sarah had been taken into surgery shortly after he arrived, but it was anyone’s guess what the outcome would be. The doctor said he would do all that he could, but Michael could tell that even he was unsure. Amy refused to come with him, refused to move.

Crystal rocked back and forth in her chair waiting for an answer. What was happening with Makayla? Why was it taking so long? She blamed herself for this day. It was true she hadn’t been the best mother, she knew it. When her husband left she tried her best to take on the role of both mom and dad, but she knew it was never good enough.

Mary stood, silently weeping, still staring at her son. Did he really just say, “Father forgive them?” How could he be so forgiving at a time like this? She couldn’t help but think that his heart was too big. How could he continue to love these people from where he was? It didn’t make sense to her at all.

At that moment, a chorus of voices rose to the heavens. Not voices of praise, but voices of sorrow.
Voices that questioned one thing:

What’s so good about Friday?