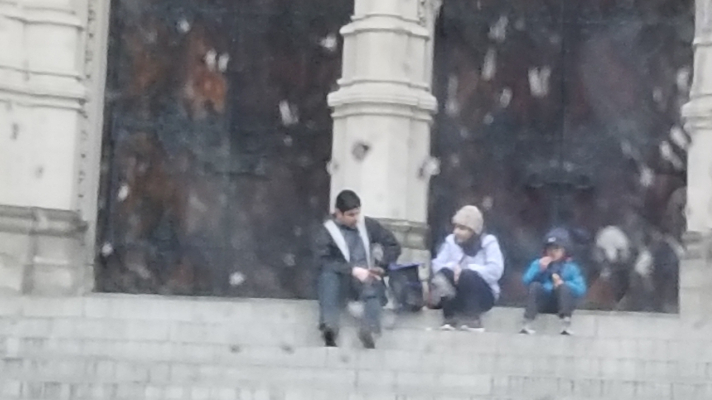 On Friday morning, I boarded the second of two buses as a chaperone, heading with the high school choir my two oldest children are a part of. Around 5 AM we were on our way to New York City where the students would perform inside the Cathedral Church of St. John the Divine.

I was looking forward to the time I would spend on the bus as I would be able to use that time to write. With my computer in my lap, I began typing, deleting, typing again, deleting again. I knew what I wanted to write, and I had ideas about how I was going to convey it, but when the words showed up in front of me, nothing sounded right. So I let it go for the time being, knowing I still had some time, and prepared for the trip at hand.

Out of seventy high school choir members, I was responsible for eight girls. This number was refreshing because I was in charge of sixteen girls just last year on the band and orchestra trip to Virginia Beach. And since NYC is, well, busy…I was happy with the smaller number.

What was even better than the smaller number was that I knew the majority of the girls. One was my daughter, three were her friends, and one was the sister of a friend. The other three I didn’t know, but they seemed really sweet (and they were). This, I knew, was going to be a good trip.

But, of course, even though God blessed me with some really amazing girls, they were still, after all, teenage girls.

I partnered up with another chaperone, increasing our number to sixteen, but we had two adults. Actually, we had three. One of the “tag-alongs,” a parent who paid to come on the trip but was not in charge of any students, was a friend of mine from church and asked to hang out with my group. Of course I was thrilled. So, three adults with sixteen girls. Not too bad.

Did I mention they were teenage girls?

During the two hours we had to explore the city on Friday before heading off to our first Broadway show, we were inundated with requests from the girls to go to this store or that store. We ended up at Starbucks, the M&M’s store, and the Disney store, but we knew we were not going to have time to head to Macy’s despite the constant hounding from one of the girls in my group.

We then headed to dinner, the show, and then back to the hotel to sleep.

The next morning we set off again, walking through the city and taking in the sights. We had more time on Saturday morning to explore before we had to make our way to the second Broadway show we would be watching. The night before, I spoke with the chaperone I partnered with and discussed our plans for the morning and relayed this information to the girls. Unfortunately, as we set out, we realized the plan had changed.

Though I was not thrilled with this, there was really nothing I could do short of reminding my partner that the girls wanted to at least get to Central Park. The more I walked, the more I realized this was not going to become a reality. I had eight girls complaining almost non-stop about this turn of events, and all I could tell them is that I couldn’t do what they wanted me to: leave the other chaperone behind. I told them to just enjoy what we were doing.

But they were relentless.

We had stopped in Bryant Park to take a picture, and as we were leaving I was still getting whiny requests about breaking off from the other group and heading our way to where the girls wanted to go. I started praying for patience. “Lord, give me patience.”

And that’s when it hit me. Patience. This was the subject of my blog post that I was trying to write; this blog post. For some reason, God felt he had to walk me through this so that I would have a more recent story, something fresh. Well, I would say it’s pretty fresh.

Why does God walk us through situations that force us to seek patience? I’m always “afraid” to ask him for patience because I know he’ll give it to me, but not in the way I want. And this weekend proved just that.

Better a patient person than a warrior, one with self-control than one who takes a city.

I wasn’t taking on a city, I was patiently listening and responding to the girls whom I enjoyed walking with. It just wasn’t easy, especially when I, too, was upset.

The Israelites wandered the desert for forty years. During this time they experienced all different kinds of emotions. When things were going well, they rejoiced. When they grew tired of the manna provided for them, they were frustrated and wanted something else. When Moses climbed the mountain to speak with God, leaving them alone for forty days, they disobeyed.

Leading an entire nation through the desert, a nation Moses couldn’t constantly keep satisfied, took a lot of patience. Was he always good in this regard? Of course not. He faltered as any human would do. But he did his job until God called him back to the mountain one last time.

Jesus needed patience as well when he was guiding his disciples. How many times did they ask questions of him that they should have already known the answer to? I’m sure he needed extra patience when it came to dealing with Peter, but he managed.

How were these two men able to exercise patience with those who followed them?

It all goes back to the very first fruit mentioned, the one that Jesus told his disciples was the greatest, the one 1 Corinthians dedicates an entire chapter to: Love.

These men loved those that followed them. Moses loved his people so much that, when God became angry and wanted to wipe them off of the face of the earth and create a new nation for Moses, he pleaded for their lives. Each and every time God wanted to destroy the people, Moses showed his love for them and asked for forgiveness for them.

Jesus loved his disciples, even the one whom he knew would betray him. In fact, Jesus loved everyone. He asked forgiveness for those who tormented him, and then he died for each and every one of us.

The love I had for these girls helped keep me sane enough to ask God for patience. I wanted to remain patient with them; I did not want to lose it. God granted me this request.

Be always humble, gentle, and patient. Show your love by being tolerant with one another.

We, as Christians, are a people who love God. At times we have a hard time being patient with him. When there’s something we are looking forward to, or something we want fixed, healed, etc, we wander anxiously. “God, now? Please? Let’s go. Right now.”

“God’s timing is perfect.” How many times have we all heard this said? Though it may be true, it’s not always what we want to hear. Sometimes we just want God to run on “our time.” But we love him, and we want to follow him always. We want to walk the path he’s set out for us, and the time this travel takes may vary according to what he has planned for us at each interval.

I waited patiently for the Lord’s help; then he listened to me and heard my cry.

Here’s something completely insane: God wants us to love all, just like he does. Therefore, shouldn’t we exercise patience with those whom we have a hard time loving, not just those we can easily love?

I admit this is not an easy concept for me. Those people I come across in my day-to-day life, those who I don’t know and may never know, do I have to show patience to them? I don’t know them! The guy who cuts me off on the road, the cashier who is taking forever with the customer in front of me, the woman on the other end of the phone who’s telling me that they’ll take my number off of their list so I won’t receive any more calls even though I’ve heard this from them over and over again.

The answer is that we really don’t have a choice in this. Well, we do, but if we want to be good disciples, following what we have been taught, then we know what our choice needs to be. No matter who we encounter, we need patience when dealing with them. We need to be “quick to hear, slow to speak and slow to anger” (James 1:19).

When our travels around the city were done, we headed to the theater to watch the second of three Broadway shows on our itinerary that weekend. During intermission, I walked to the other side of the theater to speak with my son, and that’s where I was met by the school’s choir director. We spoke about the musical, and then she said something to me I wasn’t expecting: she told me that some of the other adults on this trip were talking about the patience I had with these girls. She said I was patient. Others noticed my patience. Oh, God is good.

Thank you, Lord, for the patience you provide. Your timing is always perfect, your ways are good, and I repent of any impatience I have had. Lord, continue to bless the path you have set before me and help me to walk it, emerged fully in this gift. Thank you, Lord. Amen.

2 thoughts on “Fruit of the Spirit: Choosing Patience”