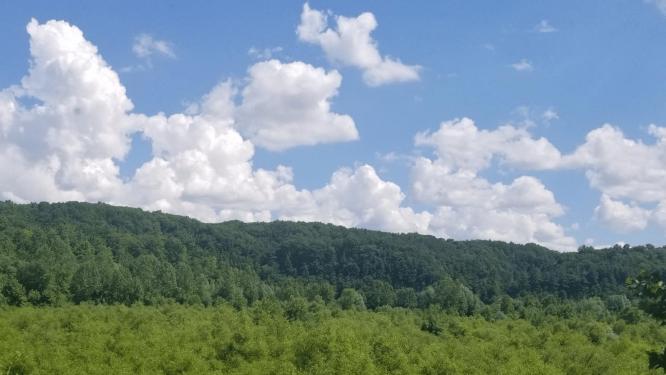 Shana bent over, placing her hands on her knees, trying desperately to catch her breath. She couldn’t give up. Although her muscles screamed at her to quit, she knew that wasn’t an option.

“No,” she said between panted breaths, “I can do this.”

She took in a deep breath and exhaled slowly. Finally able to control her breathing, she walked over to a downed tree on the side of the trail and perched upon it, welcoming the reprieve it gave her. After a quick check for tics, she unscrewed the cap from her water bottle and sucked down the cool liquid. Ahh… The water was a balm to her parched lips and throat.

“You know,” Shana said after a moment, “I think I could stay here in these woods forever. They’re just so beautiful.”

“Your wish just might come true if you don’t start moving again.”

Shana gave her husband a dirty look but conceded to his point. “Fine,” she sighed. “Help me up, will you?”

Trevor smiled and walked in front of his wife, holding his hands out to her for support. Shana smiled back and grabbed the proffered hands, allowing Trevor to pull her to her feet.

“How much farther is it, do you think?”

“Well, according to my watch, and if the trail map is correct, we only have about a mile-and-a-half to go.”

“A mile-and-a-half?” Shana looked at the hill in front of her and groaned. “And it’s all up hill?”

“Um…yes. Don’t forget the hill we came down in the beginning of the hike. Now we have to go back up. It only makes sense.”

“To you, maybe,” Shana scoffed. Her husband laughed, and she stuck her tongue out at him.

She knew she was being a baby about this whole thing. Honestly, she loved hiking. She enjoyed sitting down in front of the computer screen with Trevor and looking for a place to explore, then making their way into new territory. Today’s pick, Letchworth State Park, was familiar to them, but there were so many trails there that they hadn’t traversed before. When she had checked the map, this particular trail seemed like it would be an easy one, and she thought it would bring them to an area that would allow them a good view of the gorge.

They had traveled downhill quite a ways through the woods before leveling out and walking along an expansive patch of new growth, the charred sticks beneath their feet a telltale sign that the area had once burned down. As they continued to make their way north, they found themselves walking a tiny path surrounded by grasses taller than themselves. Shana grew uneasy and asked multiple times if they were on the right path. Thankfully, a sign greeted them after their long trek through the grass that not only told them they were still on the path, but also pointed them in the right direction.

Shana blew out a puff of air at the memory. Not once were they able to even catch a glimpse of the gorge. It was a disappointment, and now she was stuck climbing back up the ridiculously tall hill.

She looked at her husband who smiled back at her. “Let’s do this,” she said with a determination she did not feel.

“Finally,” Jason, their twelve-year-old son, said, before leading the hot and tired crew once again up the hill. Fifteen-year-old Blake, sixteen-year-old Molly, and four-year-old Carter fell in line behind Jason, leaving their parents to trail behind.

About twenty minutes later, Shana needed a quick breather. Nothing much, just a quick lean against a tree that splayed across the trail and a quick swig of water. As they rested, a couple walked by. Shana smiled and nodded at them, then watched out of the corner of her eye as they passed by. They were younger than her, possibly late twenties, early thirties? Who knew, really. She wasn’t good at guessing ages. No one would ever hire her for that game at the amusement park where she would have to guess age or weight. In any case, she knew they weren’t in their forties.

“Hey, mom,” Molly said once the couple had passed, “didn’t they already pass us once?”

Shana rolled her eyes. “Yeah. But don’t forget: they’re younger. And they don’t have kids with them.” Of course it was the kids that slowed them down. Especially Carter. After all, he was only four and had his tired tantrums from time to time.

“Okay, mom. Whatever you say.” Apparently, Shana had failed to convince her daughter that they were slow because of the kids. Not her.

Shana took one more look up the hill. “Any closer?” she asked Trevor.

With a sigh, Shana pushed herself off the tree trunk and started walking toward their destination. God, get me up this hill, she prayed. A simple prayer, but necessary in her eyes. She knew she needed God’s strength to finish even this little task.

Time slipped by, and Shana pushed herself until she was unsure if she could go any farther.

“The road’s just up there,” Blake called out. “A car just drove by.”

“Do you want me to get the car and meet you back here?” Trevor asked.

“No, but thank you.” Shana was grateful to her husband for even offering to get the car, giving her a chance to rest, but she knew it would be best just to keep going.

When they finally reached their van, Shana threw open the door and climbed inside. The cold air blasting from the air conditioner felt amazing against her sweaty skin. Thank goodness for remote start and for a husband who had the sense to use it early enough to make even the smallest of dents in the air temperature.

“So,” Trevor asked the kids, “what did you think about that hike?”

“I didn’t like the tall grass, but otherwise it was awesome,” Blake called out.

“It was cool,” Jason replied.

“It was fun!” Carter added.

“It was okay, I guess.” Shana knew that was the best answer they were going to get from Molly.

“Well,” Trevor said, looking over at Shana, “I guess it was a success, then.”

Shana closed her eyes and leaned her head against the seat. “Looks that way.” Slowly, her lips turned up in a smile. It didn’t matter how her body felt at that moment, how hot and sticky, how tired. What mattered, truly mattered, was that they had the perfect day together as a family.

With everyone in the van and buckled, Trevor shifted the gear to drive, ready for their next destination.

Today’s story is based loosely (or not-so-loosely) on a trip my family took to Letchworth State Park, the “Grand Canyon of the East,” as it is referred to (or they call themselves). I’ve always loved going to Letchworth and walking the trails that follow the gorge. Our last trip there, we chose to follow a path in a different part of the park, curious to see what it had to offer. What we found is what I wrote above. Oh, and yes, that couple exists. They passed us twice, and those were the thoughts that went through my mind.

Hopefully, you enjoyed a peek into our family adventures via this fictional story. I’d love to hear what you think! Comment below, or find me on IG or FB.