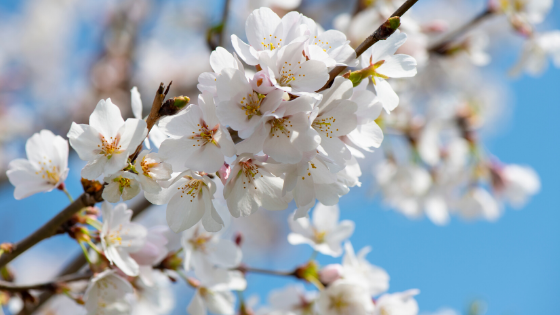 Anna Carlson sat on the cool ground facing the miniature cherry tree as a tear rolled down her cheek. All good sense would tell her not to have such an attachment to a tree, but this wasn’t just any tree. This was her tree.

Eleven years ago, Anna’s father passed away. A heart attack. At least, that’s what the hospital had said. Either way, it was all too sudden and unexpected.

At that time Anna had three children. Kaitlyn was five and approaching her Kindergarten graduation. She would have been the first grandchild he would see walk across the little stage in the elementary school cafeteria and receive a diploma. But he had missed it. He never heard her say, “When I grow up I want to be an art teacher.” Though Kaitlyn’s passions have changed since then, it didn’t really matter. He would never know.

Anna’s second child, Brendon, was four. He was the first to attend preschool, and his sweet little graduation was just as bittersweet as Kaitlyn’s. Anna’s youngest, Joshua, was approaching his second birthday. Her father had missed his first birthday, opting instead to visit her oldest sister Leila’s family in Virginia. Anna had understood that decision, of course, but her father’s death meant that he would miss all of Josh’s birthdays. Josh was also the only one of Anna’s children her father was unable to watch come into the world which he had regretted. Her dad loved being there for her kids, and her kids loved him. Even fought over him at times.

Anna brought her legs to her chest and cupped her hand over her mouth, forcing back a sob. She was not about to lose it at that moment, in her backyard, for her family and neighbors to see. Steadying herself, she took a deep breath and wiped her face dry before allowing her memories to once again drift to the surface.

On May 8th, Anna’s father was buried at Holy Sepulcher Cemetery in Rochester, New York, close to where her childhood home had been in the town of Greece. Her mind wandered to the 1929 beige colonial where she had lived from the age of three when her family moved from Albany to Rochester, until the age of twenty-four when she walked down the aisle at church and said, “I do” to Sam, the man who purchased the tree she now mourned for. Years later, that house had been sold, but that was a rabbit trail she could follow some other time.

Anna felt a warm pressure on her left shoulder and reached for the hand that rested there. A gentle voice floated down to her. “We’re ready whenever you are.” Anna squeezed her eyes shut before turning and looked up at her husband’s somber face. He knew how much today meant to her, how hard it was to say goodbye.

She stood, still holding tight to his hand. “I’m as ready as I’ll ever be,” she choked out. Sam squeezed her hand and then let go, calling out directions to Brendon and Josh as he stepped toward the tree. Taking a few steps back, she watched as Sam and the boys went to work sawing the tree into manageable pieces.

Anna’s mind drifted to Sunday, May 10th, 2009. Mother’s Day. That weekend wasn’t as hard as Anna had thought it would be. With her dad buried that Friday, all her siblings were together again. Leila, with her husband, Connor, and their eight kids, Anna’s brother, Joe, and her little sister, Lilly, all made the trek up from Virginia. One more sister, Ella, along with her husband and daughter, were already there as they had moved back up from Virginia less than a year before. Everyone was finally together. Everyone except for one.

But the siblings had been determined to not only have a great weekend, they insisted on giving their mother the best Mother’s Day in years despite the heartache. That weekend, they had taken her to Sonnenberg Gardens in the Finger Lakes. Walking around and viewing the multitude of flowers from tulips to roses, crossing the Japanese inspired bridge, and exploring the large home had eased everyone’s minds if only for a day.

That was Saturday. On Sunday, Anna’s family congregated at her parent’s house for more celebration. As they sat at the picnic table in the backyard, exchanging cherished stories of the past while the children played together, Sam drove up with a tree hanging out the trunk of their silver 2000 Hyundai Sonata. It was a surprise for Anna. A dwarf North Star sour cherry tree – a gift with a double meaning.

It was a gift for Mother’s Day, sure, but it also acted as a memorial for Anna’s father. And Anna had known the perfect place to plant it: beside the deck in the backyard where it could still be seen from the front.

Anna watched as piece by piece her tree was dismantled. Soon enough — or was it too soon? — it was time for the stump to be removed, the final step before filling in the hole that matched the void that would remain in her heart. It’s just a tree, she reminded herself, unconvincingly.

As the boys hauled the remnants of her tree away, Anna stared at the empty space where it had once been. Eleven years. Her tree had served them well for just over a decade. She remembered inspecting the tree each year and pointing out the buds to her children with excitement. “Soon, the tree will bloom!” She would exclaim. Cherry trees were her favorite. She had longed for a home where cherry trees lined both sides of a long driveway, their petals raining down like snow.

When the blooms faded, giving way to an abundance of small, round, bright red cherries, the children knew it was time to pick. Grabbing a bowl, they would pluck the ripe cherries off the tree, leaving the ones that weren’t quite ready. When they were done, the cherries would be brought inside to be rinsed, their pits removed. It was a messy job, but it was rewarding. Cherry jams would be made, sweet, sweet-tart, and cherry-lime. Anna’s favorite was cherry-lime with just the right amount of tart. Sometimes cherry muffins would be baked and consumed, other times, the cherries would be set aside for the fall to be added into homemade applesauce.

Anna sighed. This year there were no buds on the tree. No white blooms flooding the branches. That was the reason they had to cut it down. “A fungus,” Sam had recited to her after searching for answers online. “It says that when a cherry tree is infected with this fungus, the only thing you can do is cut the tree down before in infects the other trees around.” The Carlsons had another cherry tree, a Montmorency, about twenty feet from their North Star. It was larger than Anna’s cherry tree, but it was a disappointment. Less cherries, and not as tasty as the other. It was liked, but not loved. But still, they couldn’t let the fungus infect it. And their two apple trees in the backyard. Those would not be safe, either, if Anna’s tree was allowed to remain.

Which is why the difficult decision was not-so-difficult to make. Though the words Sam spoke had been painful to Anna’s ears, as though a judge was handing out the death sentence, she knew cutting down her tree was the right choice.

Sam wrapped his arm around Anna, bringing her into a tight hug. Oh, how she had always loved his hugs. When they were just friends in college, she would seek him out just for one of his reassuring hugs, but now she needed one more than ever.

Four-year-old Micah ran up to his parents, pulling them apart. “Can you do me a favor?” he asked his mom, his little nose scrunched up in the way it did whenever he asked a question.

“Sure, baby,” Anna answered, bending down to meet him eye to eye.

Micah reached his arms out. “Can you give me a hug and a kiss?”

Anna’s lungs filled with fresh air as she sucked in a breath. Her smile grew wide, and her eyes glistened. “I would love that,” she said. She picked up Micah and squeezed his tiny body. Rubbing her cheek against his, she said, “I love you.”

Micah looked at her and smiled. “I love you, too, Mommy.” She put him down and watched as he ran back to the swing set where he and Kaitlyn had been playing together. Anna looked at her family, her smile still plastered on her face.

Today was a good day.

This story, perhaps, is a little raw. However, it’s a true story, though certain actions may have been slightly embellished. Yes, I lost my tree this week. And it was hard. For 10 years, that little tree stood as a memorial to my father, creating beautiful white blooms followed by the tastiest sour cherries. Though we have replaced the tree with two just like it, it won’t be the same.

However, it really was “just a tree,” and what is more important is the people around me. My family, my friends. Even dad’s memory can’t be taken away just by removing a diseased tree.

Thank you for reading my stories. I pray you enjoy them at least a little!