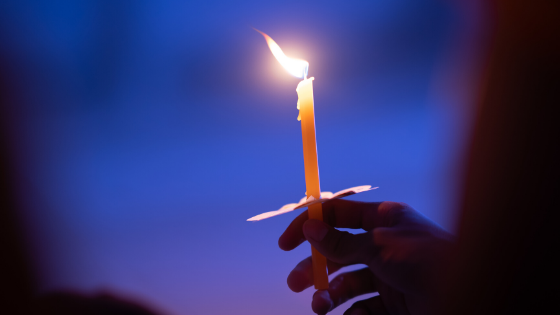 With a heavy heart, Lillian hung up the phone and placed it back in the cradle on the kitchen counter. Andrea would not be coming for Christmas. She and Peter decided they were going to surprise the children with a Disney Christmas. A last-minute decision, she wondered, or had Andrea been trying to figure out a way to tell her? “Christmas in Disney World,” she said with a sigh, shaking her head. “Of all the crazy ideas.” Though she was sure her grandchildren would enjoy their vacation, she lamented the fact that they would be in a tropical climate — Florida, of all places — devoid of snow. There would be no snowball fights, no snowman building, no snow angels.

The high-pitched sound of the kettle beckoned her to the stove. She turned off the burner and began pouring the boiling water into her favorite Christmas mug — white ceramic with a music staff running along the top. Beneath that, snowmen dressed in top hats and scarves. When tilted, it would play the popular Christmas song, “Let it Snow,” in an ear-piercing electronic sort of way. It was a gift from her kids long before they married and had families of their own, though she wondered how much say her late husband, Patrick, had in that decision.

Lilly stirred the hot cocoa powder and hot water mixture together before adding in milk to cool it down to a manageable, more drinkable temperature. With a spoonful of marshmallow fluff to top it off, Lilly headed for the living room, turning off the kitchen light as she passed by the switch.

She took her place on the bench in front of the bay window and placed her mug on the sill among a holiday village, though she didn’t let go. The warmth of the cocoa felt good in her hands. The snow fell outside the window — flakes of white against a black sky — and Lilly watched as the pine trees rocked back and forth with the help of a friendly wind. Friendly, that is, if you were inside. Which she was glad to be.

Just as she was about to take a sip of her cocoa, the familiar sound of “Jingle Bells” rang forth from her cell phone. Her grandson, Nicholas, had programmed her phone to play the familiar tune whenever a text message arrived. She was surprised by how much kids these days knew about these tiny gadgets. She would not have even thought about changing the sounds, let alone know how to perform such a task.

Lilly stood and walked to the coffee table, where she picked up her phone. Swiping the screen, she saw that it was a text from her son, Jason. Hey mom, it read. We’re heading off now. Love you.

Lilly clicked on the message and thumbed her response. Thanks for letting me know. Drive safe. Let me know when you get there.

Will do. Merry Christmas.

Jason and his wife Kristin were spending Christmas with Kristin’s parents. At least that made sense. And she had known about it for a few months now. Normally, they would spend Christmas at their home nearby, but Kristin’s dad had been ill, and they wanted to spend the holidays with him. “We don’t know what will happen,” Jason had told her one day at a family dinner. “We want her parents to watch the kids open up their presents on Christmas morning, and we can’t ask them to travel here.” Lilly had understood, and though Ralph’s health had taken a turn for the better, Jason and Kristin wanted to keep their plans. Lilly didn’t blame them. Couldn’t. Not after her own husband had passed away three years before.

Lilly placed her phone back onto the table and gazed up at the flame glowing from the gas fireplace. When she and Patrick first moved into their home, the fireplace was wood-burning. But after Patrick had passed away, the kids thought it would be better if they put in a gas insert instead. “This way,” her daughter Valerie had pointed out to her, “you’ll still be able to use it, but you won’t have to worry about the logs.” Though she missed the real wood, she was grateful to her children. Flipping a switch was much easier than keeping the wood stocked, lighting a fire, and making sure the fire was completely out before heading to bed.

As she gazed at the flame, her thoughts transported her back in time. Before she was a widow, before 9/11 or Y2K. Long before she would even have dreamed of owning a cell phone. A scene played before her, and she watched as her three children, dressed in matching flannel pajamas, hung their stockings on the mantel with the help of their daddy. The anticipation of Christmas morning danced in their eyes as they set out a plate of cookies and a glass of milk for Santa.

“Don’t forget the carrots for Rudolph!” Val would remind them.

“What about the other reindeer?” Andrea would ask.

“Dad, if Santa is so fat, why does he keep snacking on all these cookies?” Rational, logical Jason would put forth. The oldest of the three Morgan children, he wanted to appear smart.

She watched as she and Patrick said goodnight to the children and then climbed into their bed, knowing an early morning awaited them on the other side of midnight.

Lilly returned to her seat at the window and took a sip of hot chocolate. It had cooled down more while she reminisced, but it was still warm enough to enjoy. When she finished, she wiped her mouth with her fingers, removing any chocolate or marshmallow that may have been hanging around.

Alone with her thoughts again, Lilly’s mind took her on another trip to the past. Christmas morning. She could hear the quiet chattering outside her bedroom door. The kids were excited to see if Santa came during the night and what he had left them. She and Patrick rolled out of bed and opened the door.

“Did he come? Did Santa come?” Valerie, the youngest of the Morgans, jumped up and down excitedly.

“I guess there’s only one way to find out.” Patrick crept down the stairs. When he returned, he smiled. “Well, if he didn’t come, then I don’t know who ate all those cookies and carrots,” he said. The children’s eyes lit up, and the family made their way down to the living room where they were greeted by a pile of presents neatly placed beneath a tree with sparkling colored lights. The star on top shone brightly.

But who would put Jesus in the manger this year? Who would unwrap the gifts? Even Valerie, married this past spring, was spending Christmas and New Years up in the mountains.

Lilly looked at the tree standing in the corner, waiting patiently to be dressed. Ornaments collected year after year marking specific events — first year together, new house, first child, second child, third. Characters once loved and sought after. Handmade paper and popsicle stick trees brought home from school. All of these yet to be hung. The festive strings of lights had not yet wrapped themselves around the branches. No star topped the tree. Would it even matter if the tree remained this way? Lilly wasn’t sure she had the strength to decorate.

Christmas was never going to be the same.

Lilly sighed and leaned her head against the windowpane. She hoped the cold would numb her senses, but it only increased her longing for a time gone by. She closed her eyes and allowed a single tear to fall.

The faint notes of a melody reached her ears, but it wasn’t a song she remembered Nicholas programming into her phone. Still, she took a cursory glance at her phone on the table, but the screen remained black. No hint of a notification.

Yet the music continued.

Then a light caught her eye, and she peered out the window. Flames blowing in the wind, fighting a desperate fight, refusing to be snuffed out. They seemed to be moving, making their way down the sidewalk. “What in the world?”

A closer look revealed a group of people, dressed from head-to-toe in winter wear. They were walking up the path toward her front door. Lilly wiped her eyes before standing. Her curiosity piqued, she walked to the door and reached for the knob. Slowly, she pulled the door open.

Lilly smiled and fought back more tears as she recognized the familiar faces in the crowd. They smiled back at her. And they sang. They sang a carol so beautiful she couldn’t help but get swept up in it. This small group of carolers had brought her a newfound joy and peace that chased away her sadness.

She felt hands grab hold of her’s. On either side, her two best friends stood, still smiling, still singing. Lilly clung to them, her rescue that night, and she found herself singing along.

This story is loosely based upon one of my favorite Christmas songs, Merry Christmas with Love, a song I sang with my sixth-grade chorus back in 1990. It’s a song of sadness and new hope.

Sandi Patty sings a beautiful rendition of my middle school choral piece. You can listen to it below.