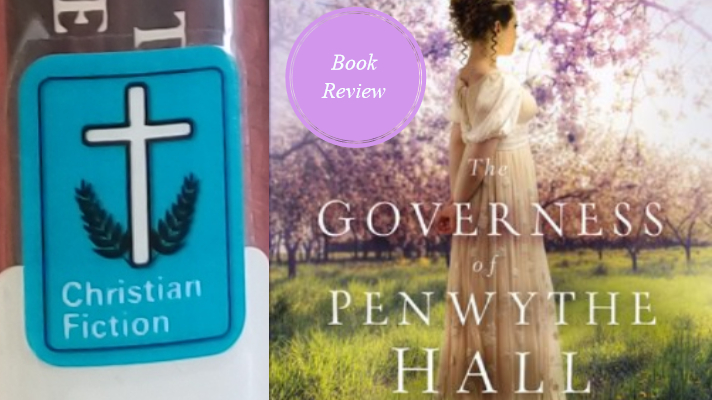 What better way to start off spring than with a trip to Cornwall, England. The year is 1811. George, Prince of Whales, has been named Prince Regent, Jane Austen is putting the finishing touches on her novel, Sense and Sensibility, and life for the Twethewey family is about to change in the Christian historical romance, The Governess of Penwythe Hall, by Sarah E. Ladd.

The five Twethewey children, Liam, Johnny, Hannah, Julia, and Sophy, had already lost their mother, and now they were faced with the untimely death of their father, Randall Twethewey.

It was an accident; a jump executed so many times before with ease. One misstep and Randall’s horse toppled, throwing Randall off, the horse landing on top of him. Death was inevitable, so Randall did the one thing he was capable of from the confines of his bed: he changed his will to name his younger brother, Jac, a man he had not spoken to since their argument and falling out years earlier, as guardian of the Twethewey children.

The other command he made from his death bed was that his children’s tutor and governess, Mr. Simon and Mrs. Greythorne, would remain with the children as employees of the trust set up by Randall.

Cordelia Greythorne, or “Delia,” as she is affectionately called, was once married to a man named Robert, and together they had a daughter, Maria. Maria passed away from a fever at a very young age, and her death was too much for Robert to bear. His once gentle demeanor changed, and he threw himself into the family business: smuggling.

Though always working for his family, Robert no longer took great care to what happened to him, and one fateful night of smuggling ended up as his last.

The dangerous, spiteful Greythornes blamed Delia for Robert’s death, but even more hazardous was the fact that Delia had intel the Greythorne’s wanted, but she continued to deny this fact. Knowing this information would die along with Delia, her life was spared, but she was sent away from the family home with a threat to never return not only to their home or to the town of Morrisea, but to the entire county of Cornwall.

Now, however, her employment with the Twethewey family as their governess for the past three years has brought her back to the place to which her return was forbidden.

“Penwythe Hall is the seat of an estate on the north coast of Cornwall, quite close to the sea and north of the moors. It’s an ancient place—been there for hundreds of years, I’d guess—but sadly, it’s fallen into disrepair over the last couple of decades” (pg. 20).

Penwythe Hall was the home where Randall and Jac Twethewey grew up after their aunt and uncle took them in when their parents died. Both boys grew, and eventually, Randall moved to Yorkshire, married, had a family, and became a successful businessman. Jac always stayed close to home, so when their uncle passed away the family home was willed to Jac, the younger of the two boys, instead of Randall. This caused a rift between the two brothers.

Taking on the estate was no easy task for Jac Twethewey, and now he was working on a way to start bringing in a decent income to help with the upkeep of his home. His decision was to convert the old grain fields into apple orchards. He would then purchase and install an apple press for any interested growers to make cider. It was a risky venture, but he needed to think of something, and he had faith in his plan.

What Jac was unaware of, however, was the new tenants pulling up to his house in two carriages. Word had not yet reached Jac about his brother’s death, nor of the fact that he would be the guardian to his nieces and nephews. A quiet home enjoyed by Jac and his servants was now taking on seven new people, and a new sense of life.

The Greythorne name is a well-known name in the area, especially after the fateful night of Robert Greythorne’s death, and the death of other men in the raid, and when it was found out that Cordelia’s last name was Greythorne, word began to travel. The knowledge of who the Greythornes were put others on their guard around Delia, and eventually her husband’s family was made aware of her return.

If she had stayed away, the Greythornes would have left her alone, but now they felt it their right to pursue once again the matter of the secured information. Gripping fear came over Delia from the first night her brother-in-law showed up in front of her, in the home she now resided.

One event after another lead to a kidnapping of the eldest Twethewey boy, Liam. This was the final straw that led Delia to give up the information she held so tightly to. It took courage to follow through with the plan to rescue Liam, but she remained strong and did what she knew she needed to do. Thankfully, she had the help of her brother, Horace, and her employer, Jac Twethewey.

Honestly, I love historical fiction, it’s my favorite genre, but at times it does disappoint. With that in mind, I am happy to say that this particular story did not.

I was interested in the characters from the beginning, and I enjoyed watching as Jac and the children interacted and grew together (Jac really is a great uncle). The relationship between Delia and Jac was interesting to follow along with, and I enjoyed learning about each character, including those who were not who, or how, I thought they were.

There were times when the content surprised me, and I never expected the book to have such a suspenseful side. True, the back cover does say, “Rich with family secrets, lingering danger,” etc, but for some reason, it took me off guard. In a good way.

Sarah E Ladd does a great job with her writing. Though at times her repeated descriptions and repetitive phrases made me roll my eyes, they never really detracted from the story itself.

Ladd has books published previous to this one (which I have never read), though this is the first in the Cornwall series. Her next book in this series, The Thief of Lanwyn Manor, is due to arrive January 2020, and I think it may just end up on my “To Read” list for 2020.

Would I recommend this book? Most definitely. If you are a fan of historical fiction, and some clean, wholesome romance with a little bit of mystery and suspense, then I would definitely give this a read.

What’s up next for my fiction reads?

Is there a book on your list you want to recommend
me know in the comments below!